After trying different setups and OS, i'm actually working with two different setups, my work computer a lame Fujitsu Siemens 15" wide with Core 2 Duo 2.4Ghz and 2GB of Ram, this machine runs a Windows Vista SP1, it's really fast in this machine and i'm pretty happy with it; and my other computer is my personal laptop a Macbook Pro 15" Core Duo 2.0Ghz and 2GB Ram, really is the best computer i owned, it's a pleasure to use this computer and i enjoy a lot the OSX.

First i want to make clear why i use Windows Vista instead of Linux? Well because i'm working a lot with Office Documents, and i couldn't find a good solution on Linux (i tried almost everything), also the different problems i have with Linux that are time consuming to fix (Multiple screens, is a difficult task for a linux, i don't know why they do not create a easy config tool like Windows)

So where is Linux? i run linux on both machines in a Vmware machine, in the Fujitsu Machine is blazing fast, so fast that i had to try it native and compare, and to my perception it was faster in the Virtual Machine, not so sure why, but is good for me :)

And in my personal computer linux runs in Vmware Fusion, a great piece of software. You might be wondering, "it's the same as the others vmwares out there", well NO, it has a feature called Unity, that allows you to run the Guest operative applications, on the HOST desktop, as if they were a native application, i talked of a feature like this in Parallels called Coherence, both Vmware and Parallels supported Windows Guest system for this feature, but recently Vmware Fusion added support to Linux guest systems.

Here is my OSX desktop, running my Ubuntu linux applications (the ones with black windows): 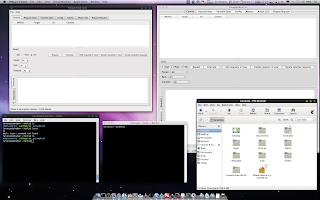 You can see the ProxyStrike running on OSX and Linux, and a Ubuntu Terminal and a OSX Terminal, also a Ubuntu file manager windows.

For OSX to be perfect, i would like to have windows management options like WMII, not all of them, but basic ones, like WinSplit Revolution on Windows.

(After writing this post I found a way of doing some of the tricks, but you have to use AppleScript and Quicksilver, i will post later a customized version)

In future post i will show the software i usually use on both machines for my pentesting tasks and for productivity also..

What is your desktop setup?